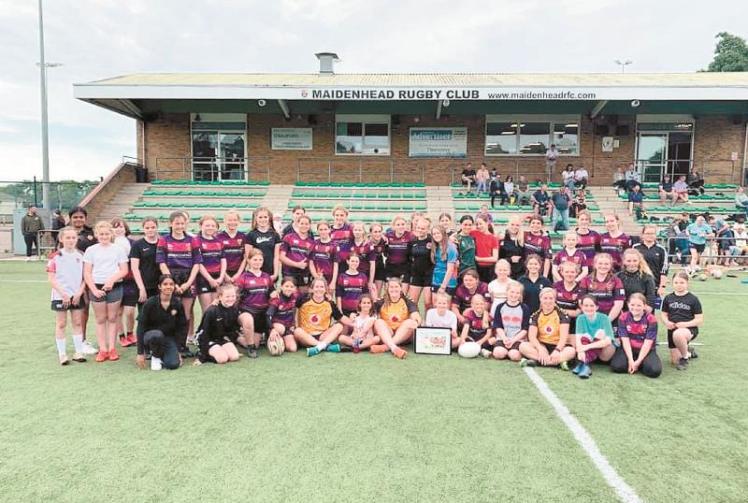 Girls of all abilities and experience were taken through a series of drills and games by England's Grand Slam winning forward Maud Muir, who led the session with help from Ireland's Edel McMahon and Wasps Ladies fly-half Lizzie Goulden.

Reflecting on the event, Edel said: “Fun afternoon with Maidenhead RFC's girls. Such a great turnout and I can't wait to see these girls playing in the future.”

Those teams played their first competitive matches in tournaments at Reading and Newbury back in February having benefitted from regular training sessions from Muir and other coaches at Braywick.

Stephen Jones, the club's director of women's and girls' rugby, said: “It was way bigger than we imagined. Nearly 50 girls.

“Some were existing players but there were also many new players from a whole range of Schools.

“Maud Muir was presented with signed cartoon of herself drawn by the artist Emma Sweeting.

“There was great coaching from Maud, Edel McMahon and Lizzy Goulding.

“Our plan to run three age group teams in the new season are now coming to fruition.

“Training for girls will take place every Wednesday evening in August at Braywick Park.”

Maids are also looking for an additional coach for its women's Iron Maidens team.

The team has a manager and two coaches already in place. Training takes place on Thursday evenings with matches on Sundays.

Pre-season training has already commenced for Maidenhead's first team players and senior squads, with Will Greenwood leading the squad through some strength and conditioning drills.

The Regional 1 South Central fixtures have also been released, with Maidenhead hosting newly promoted London Welsh at Braywick Park on Saturday, September 3 before visiting old rivals Bracknell the following weekend (September 10). The season is set to finish with a trip to London Welsh on March 11.

Maids first team have been switched out of the London & South East Premier Division following a summer rejig by the RFU.

The National League 2 is being split from two divisions into three, while at Maidenhead's level four leagues are being broken apart to make six slightly smaller divisions.

Parrott: 'The success of our club shouldn't be judged solely on first team results'

Maidenhead to round off season of sustained improvement at North Walsham