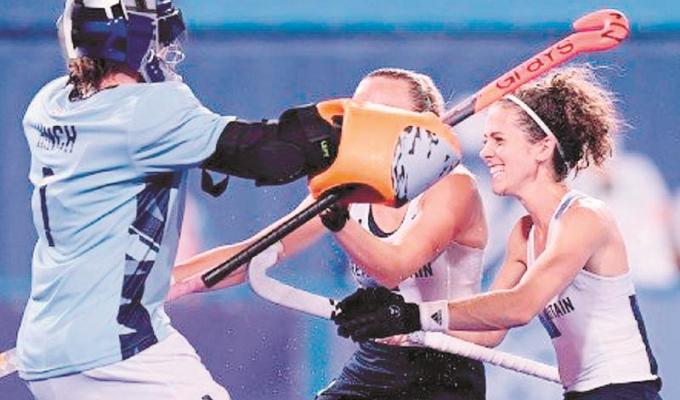 Maidenhead’s Maddie Hinch produced another goalkeeping masterclass as she saved everyone of Spain’s penalties in a shoot-out to secure Team GB’s passage to the Olympic semi-finals.

Fellow Maidonian Hannah Martin and Sarah Jones both found the net in the shoot-out while Hinch saved all four of Spain’s efforts to set up a semi-final clash against the Netherlands.

Argentina and India are in Wednesday’s other semi-final clash.

GB lost 1-0 to the Netherlands in the pool stages last week, but the Dutch are the team Great Britain defeated in the final five years ago to take gold in Rio.

Martin showed excellent perseverance to battle her way into the D on the right before firing home off the boot of the Spain keeper in the second quarter to make it 1-0, but Spain’s Belen Iglesias Marcos equalised shortly after.

Giselle Ansley saw a flick of her own blocked in the 24th minute as both teams once again neutralised each other to go into the half-time break all square.

Clara Ycart was shown a green card early in the third quarter and Great Britain immediately made them pay, winning a corner that Balsdon rocketed high into the top corner to restore her side’s lead.

Former Claires Court School student Ellie Rayer then had a shot on the turn blocked shortly after before Spain went onto the front foot, trying to break into the British circle in the remaining moments of the quarter but meeting stern resistance.

Grace Balsdon rocketed home GB’s second from a penalty corner in the third quarter, but the defending champions came under increased pressure in the final quarter and Berta Bonastre Peremateu levelled matters with nine minutes to play.

Earlier in the day India claimed a surprise 1-0 win over Australia to reach the semi-finals for the first time while Argentina beat Germany 3-0.

The Netherlands defeated New Zealand 3-0 to reach the final four.