A Burnham resident is calling on a housing association to take action over fly-tipping and the ‘awful’ appearance of the garages in Grenville Close.

Val Eyre, who lives in the close with her husband David, said that the set of garages at the end ‘have gradually been getting messier and messier’ with either the doors ‘hanging off’ or having plywood across them.

She added that the area also contained fly-tipped rubbish, including items such as a bath tub, carpets, food waste and rubble.

The 58-year-old said that she contacted the housing association L&Q, which owns the land the garages are on, and was ‘passed from pillar to post’ before the contract was finally signed off and contractors came out on Thursday, August 13 and Friday, August 14.

Val said some of the rubbish was taken away, but there is ‘still a whole load there’.

Speaking about the garages, she said: “They look shocking, they look like they should be knocked down.”

She added: “I am really frustrated because living in the close, it brings the close down hugely.

“I think it’s a proper eyesore. I have to see it on a daily basis.

“I just think it’s a real shame that they don’t bother to keep it tidy. The close is a tidy close. A lot of people own their own properties and maintain them well.”

Val added she was told by L&Q that it has had ‘quite a few complaints’ from other people regarding this issue and added the rubbish could be a ‘fire hazard’.

A spokesperson for L&Q said: “We apologise that we’ve fallen short of our usual high standards on this occasion and are committed to resolving this issue as soon as we can.

“The rubbish was reported to us earlier this month and we have been liaising with the resident who contacted us since then.

“Part of the rubbish has been collected already and the remainder will be collected as soon as possible.

“We are now working on an action plan to prevent this issue from reoccurring and are also considering alternative uses for the garage site.

“We will keep residents updated on this.” 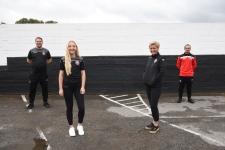