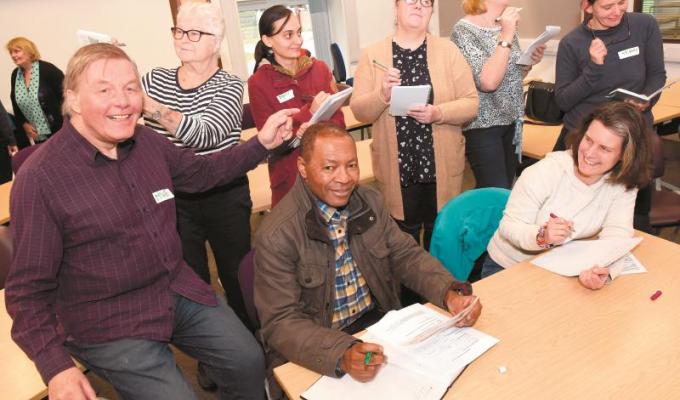 Aspiring writers got the chance to share ideas and produce outlines of their short stories at a creative writing taster session last Wednesday.

The two-hour free session was led by Burnham-based playwright and journalist Michael Pearcy, who asked attendees to come to the session with a short story idea in mind.

The first half of the session, which took place at Burnham Library, saw 15 people split into pairs to discuss their idea and give each other feedback, while the second half was used to create an outline, which consists of writing the events that will go in the story, in chronological order.

Michael said: “What I hoped to do was to send them home with at least something like an early draft or at least an outline for the story.

“Short stories are a very good way to begin because you learn how to structure a story and you make all your mistakes. [Then] you feel more confident to attempt a longer piece of work.”

The writer, who started his career in the 1990s, added that with enough sign-ups, he will also be able to lead a six-week daytime writing course at the library, running between Tuesday, January 21 and Tuesday, February 25 between noon and 2.30pm.

Discussing the storytelling course, Michael added that a wide range of topics are covered including description, dialogue, characters, characterisation and layout.

“They form a bond and it’s really nice to watch and they become very comfortable with one another and they trust one another’s opinion,” he said.

“Also individual people, their confidence grows. They are with a group of people who are like-minded and prepared to listen and be kind but critical and they then come out of their shell and by the end of the six weeks you find that they are almost leading the group, sometimes because they’ve got a lot to say but they’ve not had the confidence to say it, it’s very good.”

Michael, who is a member of the Slough Writers and Friends of Burnham Library, added that he adopts the ‘real-world approach to creative writing’, which sees him teach people not to worry about making their writing perfect, but relays the message ‘don’t get it right, get it written’.

Discussing the taster session, Michael added: “A couple of them were saying they were definitely going to go on with their stories.”

For more information and to book the six-week course visit writestart.co.uk