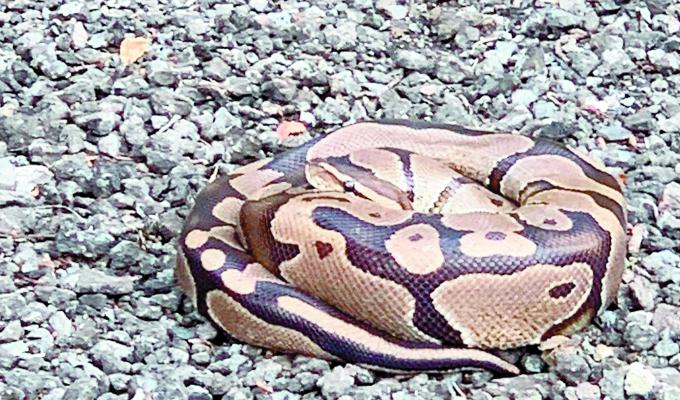 A 10ft Royal Python on the loose in Knowl Hill for a week has been captured by reptile rescue experts.

A 10ft Royal Python on the loose in Knowl Hill for a week has been captured by reptile rescue experts.

Last week, the 10ft non-venomous constrictor, an adult male, was spotted near residential areas in fields at the edge of Warren Row Road.

Thought to be a pet abandoned in woodland nearby, his appearance startled many and caused concern among locals and snake lovers alike.

After some investigation and piecing together snippets of

information left on social media, local members of the National Exotics – Animal Rescue Services found the snake on Sunday and took him to safety.

One of the volunteers was John Poynter who, when not working for the South Central Ambulance Service, gives his time to reptile centres and rescue missions.

When he approached the

location in Choseley Road, Knowl Hill, where the snake had moved to, he found it lying on some grey tarmac.

“It had gone to where there was heat, I suspect,” he said.

“When I first got there it was looking up and around and then its head disappeared and it went into a ball.

“We picked it up in a pillowcase and took him home to feed him.

“He was probably hungry, tired and a bit scared. I’m surprised he wasn’t attacked by a fox or something.”

The snake is now being cared for in one of the rescue service volunteers’ homes while the owner is being sought.

“Surprisingly, for being out for a week in all weathers he’s well,” said John.

“He’s a good size and his skin in good condition. He’s doing ok.”

This is the first large snake rescue of its kind that the National Exotics – Animal Rescue Services have carried out in this area.

According to John, requests made of the rescue services are on the increase, with more calls than ever before being made to the team by Thames Valley Police.

“A lot of reptiles are being dropped off at rescue centres or abandoned locally like this one,” he said.

Due to the rise in cost of living, reptiles such as these are expensive to keep.

“Reptiles are cold blooded and need heat mats to keep them warm. But those heat mats and food for snakes has gone up exponentially and people are struggling to afford to keep them,” he said.

“We are trying to trace the owner but we’re not holding much hope,” he added.

If they do come forward they must show proof of ownership before the snake is released.

He added that if anyone is concerned about being able to afford and keep a reptile or animal, to contact the relevant services who will take the pet in.

Details of the National Exotics – Animal Rescue Services can be found on Facebook.